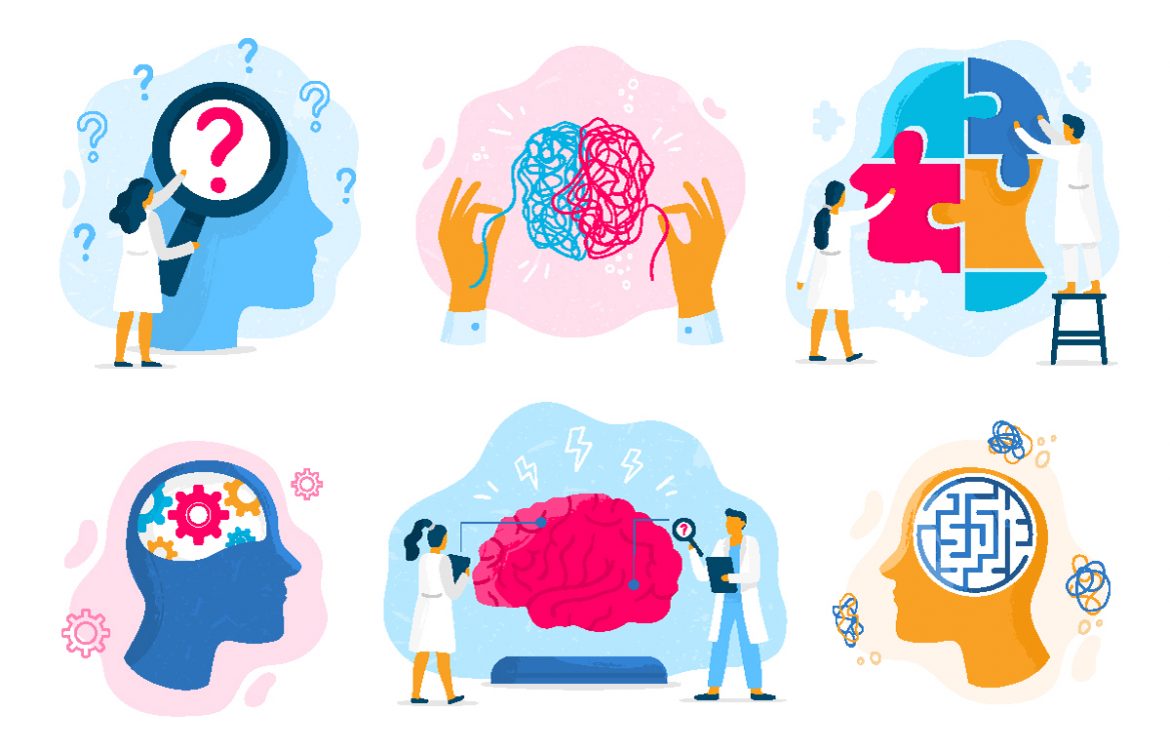 For magic mushroom enthusiasts, it’s no secret that psilocybin has great potential for treating mental health conditions. The science world has been slow to catch up and further study psilocybin’s therapeutic potential, mostly due to legal roadblocks. Now, scientific and medical research institutes around the world are starting to find interest in psilocybin as a potential therapy for mental health disorders.

One unique compilation of research studies provided by the National Institutes of Health (NIH) titled “Clinical potential of psilocybin as a treatment for mental health conditions” lists all of the studied and tested ways that psilocybin can be used to treat a wide range of mental disorders. The research study by Jeremy Daniel and Margaret Haberman is an all-inclusive guide to the potential of psilocybin as a major treatment in the mental health field.

In this guide, we’ll break down what the National Institutes of Health are doing to make psilocybin more accessible for mental health treatment, as well as the details uncovered in their major research study.

Are you interested in becoming an amateur mycologist or mushroom researcher? At Sacred Mushroom Spores, we are happy to provide a wide range of psilocybe cubensis spores and psilocybin spores for scientific study. Our platform offers a wide range of strains and mutations that are lots of fun to study, either as a hobby or as a professional researcher. Browse our shop today to explore our vast collection of rare Psilocybe cubensis Mushroom Spore Syringes.

It’s worth noting that in the United States, the cultivation of magic mushroom spores and consumption of grown fruit bodies is against federal law. All of our Mushroom Spore Syringes for sale sold by Sacred Mushroom Spores are for research and microscopy study purposes only and are not sold to be consumed or cultivated.

The active element in magic mushrooms is psilocybin. Proponents point to studies that show psilocybin has potential as a therapy for a variety of mental diseases. We’ve witnessed a surge in interest in psilocybin-related investments as US residents become more knowledgeable about the study.

Psychedelics, usually referred to as hallucinogens, are psychoactive drugs that alter perception, emotion, and cognitive processes. Psychedelics have a long history of medicinal usage, despite the fact that most people think of them as a recreational drug associated with the counterculture of the 1960s. However, due to negative publicity and political beliefs, there has been little research in this field for decades. As public awareness of mental illness rises, there is increasing interest in using psychedelics like psilocybin to treat a range of mental diseases.

According to various research, psilocybin can help patients address concerns and sensations that are ordinarily too distressing with the support of experienced therapists. Other studies have found that psilocybin might help with suicidality, anxiety disorders, obsessive-compulsive disorder, alcoholism, cigarette cessation, and post-traumatic stress disorder, among other things. The potential use of psilocybin for alleviating end-of-life suffering in palliative patients has received a lot of attention. When standard therapy methods fail for terminally sick patients, as they frequently do, proponents see psilocybin as giving alleviation from mental anguish, particularly anxiety. This interest in psilocybin as a therapy also includes the possibility of using it to help grieving people.

Research is sporatic and can be difficult to find. Luckily, Daniel and Haverman’s research study for the NIH has proved to be great research for finding specific evidence and studies related to different applications of psilocybin as a mental health treatment. Let’s break down that research study.

The Intention and Background of the NIH Psilocybin Study

To better understand the intention of this study, it helps to really understand what psilocybin is.

Psilocybin, a well-known hallucinogen, is a substance generated by more than 100 different mushroom species across the world. It has a strong affinity for serotonin receptors such as 5-HT1A, 5-HT2A, and 5-HT2C, which are found throughout the brain, including the cerebral cortex and thalamus. Psilocybin, as a typical tryptamine hallucinogen, exhibits effects comparable to lysergic acid diethylamide (LSD) and mescaline, although its molecular structure is slightly different.

Albert Hofmann discovered psilocybin from the Central American fungus Psilocybe mexicana in 1957. Shortly after, in 1958, the first synthetic psilocybin product was developed, and it is still extensively used today, both recreationally and in spiritual or religious rites. It has now been discovered in over 100 mushroom species throughout the world, with varied degrees of strength. These mushrooms can be grown in a lab or discovered in the wild. Cultivated mushrooms are more effective because stronger mushroom strains with higher active ingredients are chosen (up to 10 times that of some wild mushroom species).

Clinical investigations using hallucinogens and psychedelics have practically ended since the Controlled Substance Act (CSA) of 1970. Because of the limited size of the studies or technique that did not meet modern research standards, most of the research done on these agents in the 1950s and 1960s was dismissed. However, there was continued interest in learning more about these drugs’ neuropsychiatric effects and their possible involvement in medical therapy. Clinical study in humans looked implausible, and finding financial sources was nearly hard, due to these medications’ CSA Schedule I designation. In 1992, the National Institute on Drug Abuse collaborated with a Food and Drug Administration advisory group to enable psychedelic drug research to resume.

More research is being done to better understand the effects of psilocybin usage in a variety of illness conditions, thanks to legislation passed in 1992. Depressed mood, anxiety disorders, obsessive-compulsive disorder, alcohol use disorder, and tobacco use disorder have all been examined as mental health illness states and symptoms. This research article provided by the NIH provides an in-depth review of the study design and results of psilocybin in each of these conditions and discusses the clinical potential for use.

Key Findings – Psilocybin as a Treatment for Mental Health Disorders

In 2006 and 2008, a group of researchers mentioned in the NIH study released publications looking into the psychological effects of psilocybin in healthy individuals. Adults who had never experienced hallucinogens were administered oral psilocybin or methylphenidate in two or three sessions. They were advised that at least one of the sessions would include a moderate or high dosage of psilocybin. The patients showed substantially higher ratings of positive attitudes, mood, social impacts, and behavior with the psilocybin sessions compared to the methylphenidate sessions at both 2 months post-drug sessions and 14 months follow-up. The most significant conclusion of the research, according to the authors, was that a considerable number of patients evaluated their psilocybin encounter as one of the most meaningful events of their life. Because patient buy-in to therapy is so vital in mental health, this degree of treatment pleasure might potentially boost efficacy. In addition, based on patient interviews, the 14-month follow-up revealed no indication of deleterious consequences from psilocybin exposure. In this study, psilocybin was provided in a controlled setting, therefore external validity may be lower than in the general mental health community.

The use of psilocybin to alleviate anxiety symptoms in cancer patients was examined in some of the early clinical studies on the drug. Charles Grob (and colleagues) conducted a double-blind, placebo-controlled trial in 12 patients to assess the safety and effectiveness of psilocybin in the treatment of psychological distress associated with terminal disease’s existential crisis. A diagnosis of acute stress disorder, generalized anxiety disorder, anxiety disorder owing to cancer, or adjustment disorder with anxiety as defined by the DSM-IV, as well as a diagnosis of advanced-stage cancer, were required for inclusion. Patients were given either active psilocybin (200 mcg/kg) or niacin 250 mg, both in the form of oral capsules. When comparing the psilocybin group to the niacin group, anxiety decreased considerably at 1 and 3 months post-treatment, as judged by the State-Trait Anxiety Inventory. Mood improved after two weeks following therapy, and the Beck Depression Inventory attained statistical significance at six months with the same comparison. This short study with a modest dose of psilocybin suggests that more investigation into whether psilocybin may be utilized as a drug to treat anxiety disorders is warranted.

A study including 9 OCD patients was undertaken by one group of researchers. Based on its serotonergic function, they anticipated that taking psilocybin orally may help reduce OCD symptoms. The 9 patients were given up to four distinct dosages separated by at least one week, and 88.9% of them exhibited a decrease in symptoms of more than or equal to 25% on the Yale-Brown Obsessive Compulsive Scale (YBOCS) at the 24-hour mark.

One notable study involved dosing ten patients that had been diagnosed with alcohol dependence with psilocybin. After twelve weeks of treatment, 27.2% of participants were able to decrease their alcohol intake.

Another important thing that the research article from the NIH notes is concern that psilocybin might be unsafe for those with mental health problems.

Despite no clinical data suggesting substantial safety difficulties or the formation of addiction with the administration of hallucinogens, there has been some worry that using them in a mental health population might aggravate the underlying disorder or trigger suicidal conduct. Researchers in the Netherlands set out to investigate this allegation and produced a population study summarizing their findings. This study comprised 19,299 psychedelic users who used LSD, mescaline, and/or psilocybin among 135,095 randomly selected people in the United States. There was no link identified between psychedelic usage over time and increasing mental health treatment or suicide thoughts, intentions, or attempts.

Furthermore, there is evidence that when used as a mental illness therapy, psilocybin does not produce psychosis or other negative consequences. A review of psilocybin use in the Netherlands came up with results that were comparable to the prior study. According to the authors’ findings, dependency potential was low, acute toxicity was moderate, and there were just a few mild or severe side effects. Chronic toxicity was likewise modest, and the dangers to public health were minimal.

Psilocybin appears to have some efficacy as an alternative agent to address mental health disorders, based on the research reported. These studies, however, have a number of drawbacks. Many of them are minor and can’t be applied to bigger groups of people. Furthermore, because psilocybin is classified as a Schedule I substance by the CSA, it was given under strict supervision. External validity of these studies may be missing since rates of nonadherence are greater in the mental health population than in the general population.

With this in mind, readers should be hopeful after reading through the research compiled by the NIH. More and more government bodies are legalizing the use of psilocybin for medical purposes, and we can expect to see more studies on the link between psilocybin and mental health therapy in the near future.We hope you have enjoyed this information! Don’t forget to take a look at our collection of Mushroom Spore Syringes and mushroom spores for sale at Sacred Mushroom Sporesto start your microscopic research today.