Albino Penis Envy, often known as APE, is a hybrid between the popular Penis Envy and the uncommon PF Penis spore strains of the Psilocybe cubensis magic mushroom. Albino Penis Envy mushrooms produce extremely few spores, making spore propagation difficult. This, along with their distinct look and heightened potency, makes them a sought-after mushroom variety. While studying this strain under a microscope can be difficult, it is well worth the effort since the spores are stunning and endlessly amusing to look at.

Growth Characteristics of Albino Penis Envy shroom spores: The body of the Albino Penis Envy strain is thick, with fat stems and tiny caps. The Albino Penis Envy mushroom gets its name from its phallic shape. When completely developed, the cap of this strain has a relatively tiny diameter and a blue hue. When injured, the stem develops a grey-blue color, which is fortunate. Because they are more difficult to work with than other popular strains, these spores are recommended for expert researchers. The grown fruiting body grown from Albino Penis Envy psilocybin spores are considered to be very potent. At maturity, Albino Penis Envy caps are around 30mm in diameter and concave to slightly convex. Grown mushrooms have a velum or veil and are pale white to yellowish in color, frequently with blue tinges. This mushroom’s flesh is white and bruises easily to a blue green color. On four-spored basidia, this strain’s spores are frequently white, sometimes purplish-brown, and subellipsoid.

What You Get in Our Kit of Albino Penis Envy Spores: Customers will receive a 10mil syringe filled with sterile water with Albino Penis Envy mushroom spores suspended in the solution. Ensure that your spore syringe is refrigerated for up to three months upon receiving. 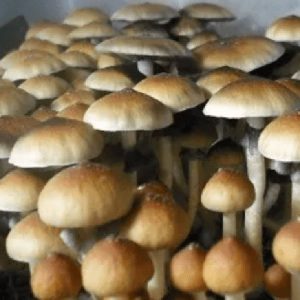 Originally discovered in Thailand, the Pink Buffalo magic mushroom strain is also found in all of the Americas. This strain boasts very long stems that can reach 20 cm easily. This strain is unique in that it has a reflective appearance and bruised a very vivid blue. 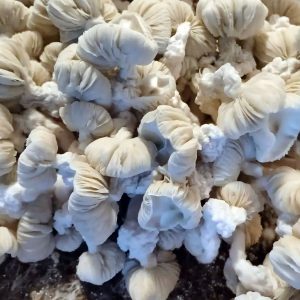 This isolation is unique in that it has a albino appearance that most cubensis mushrooms don’t have. TAT (also known as True Albino Teacher) is a special form of psilocybin magic mushroom that has all of the same properties as the original Golden Teacher strain. In addition to these properties, the TAT mushroom has a very pretty, all-white albino look to it. Pair that translucent, ghostly appearance with a silver hue and you’ve got TAT 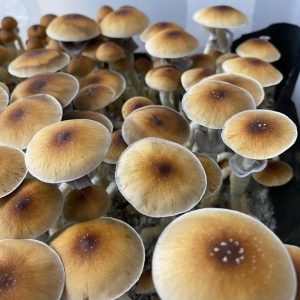 Blue Meanie psilocybe cubensis spores were first found in Australia, where it thrives in warm and damp environments. This strain boasts a rich blue hue when bruised, substantially more than other mushroom spores for sale on our website. As the Blue Meanie matures, its thin, fleshy caps begin to crack. At maturity, this mushroom stands at about 12 cm.