View cart “Ecuador Mushroom Spores” has been added to your cart. Originally discovered in Thailand, the Pink Buffalo magic mushroom strain is also found in all of the Americas. This strain boasts very long stems that can reach 20 cm easily. This strain is unique in that it has a reflective appearance and bruised a very vivid blue.

The Discovery of the Pink Buffalo Mushroom

This psilocybe cubensis variety of mushroom was initially discovered on a farm in Thailand, where it was growing on a mound of manure and straw as a mushroom substrate. The Pink Buffalo strain of psilocybin mushrooms was identified by renowned mycologist John Allen. He discovered the strain, according to legend, in a field where a holy pink buffalo had been spotted. Current mycologists believe it can also be found in Thai rice paddies where water buffalo graze. There’s a bit of Thai mythology that says seeing pink buffalo shrooms blooming in the wild is also good luck.

Pink Buffalo is an excellent strain to begin studying if you’re interested in researching Asian cubensis mushroom spore strains, but one should definitely have some expertise as a microscopist first. This mushroom spore strain is particularly unique and exquisite in maturity and under the microscope. Its caps range in size from big to extremely large, measuring between 25 and 75 mm in diameter. Colors range from reddish brown to cinnamon brown to a light cream, with a prominent nipple in the middle. The surface of the cap can also become viscid, giving it a more gelatinous feel than other mushrooms. Its stems range in color from pale cream to yellow and are rather long, measuring between 125 and 200 mm in length. When the stems are injured, they become a deep blue color. Its gills have been seen to change color from gray to black.

What You’ll Get with Your Pink Buffalo Mushroom Kit

Are you a fan of magic mushroom spores and the microscopic study of shroom spores? Browse our other rare varieties and strains at Sacred Mushroom Spores! 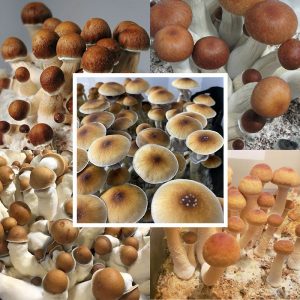 Purchase our Value 5 Pack and save big! These 5 strains are some of our most popular researched mushroom spore varieties. 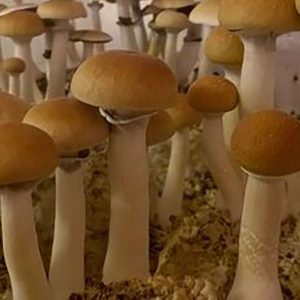 Amazonian psilocybin mushroom spores are a classic strain beloved by novice and advanced hobbyists alike. Grown in the Amazon rainforest, this strain boasts very thick and meaty mushrooms with very large stems. The Amazonian mushroom is also known for its blue coloration and its lightning-fast growing speed. Typically, this strain will reach maturity at about two inches. 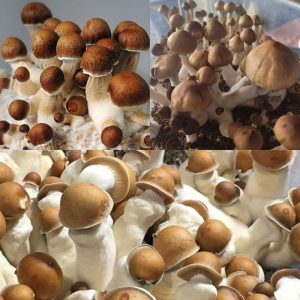 Purchase our Value 3 Pack and save big! These 3 strains are our most popular researched mushroom spore varieties.